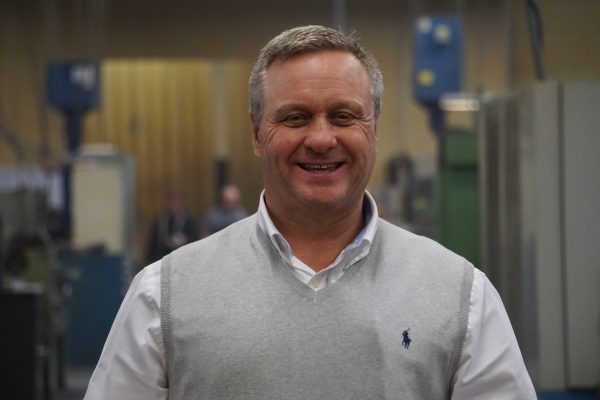 Tucked away in a quiet corner of Gates sits Innex Innovative Industries, a modest machine shop entering its seventh year in Rochester, employing just under 50 employees. Yet, behind the scenes of the understated storefront, big things are happening. Kilns fire and precision machines whir along a humble work floor, pumping out machine parts that will soon find their homes in factories around the world.

Since 2014, Innex has produced ceramic machine parts from scratch, specifically for the battery industry. While ceramics reach back to the earliest hours of human civilization, the innovations happening at Innex stand to change the game when it comes to ceramic’s role in industry. Innex is the manufacturer of ceramic compounds Ceraminator, Ceraminator Plus and Cereel: incredibly tough, hard ceramics produced through a combination of high pressure and a secret recipe base powder. Stacked up against their stainless steel counterparts, president and CEO of Innex Tom Blaszczykiewicz says Innex’s ceramic parts are expected to have about five times the life span.

“Steel will wear out a lot faster,” Blaszczykiewicz said. “And that means they have to shut down equipment, and we’re talking large factories which are highly automated and worth multiple millions of dollars running. The cost of shutting down is very expensive, so if they can use ceramic technology to keep going, it’s very cost-effective for them.”

While Blaszczykiewicz said Innex’s parts have touched virtually every battery you can find on a store shelf, the company is looking to grow into other markets; specifically the pharmaceutical industry. In talks with companies like Bayer and Pfizer, Innex has produced a pill press component composed of Cereel. Holding a full stainless steel press in one hand and Cereel-tipped one in the other, Blaszczykiewicz explained the benefits pharmaceutical giants could see by swapping out parts. Likewise, while all components will inevitably break, Innex’s use of metallic powders in the ceramics allows for them to be detected by a regular metal detector already used in inspecting medicines. Meaning, the possibility of a contamination is just as easily caught as with traditional steel components, a feature which most other ceramics lack.

“When these are placed on a press that goes around and around, it’s called a rotating press, and a cam hits it,” Blaszczykiewicz said. “What happens is, the steel wears out a lot faster, and shortens the length of the tool, and you don’t get the same compaction when you make the tablet. The ceramic lasts a lot longer, so you have a lot better quality because you retain the strength and compaction of the tool.”

The lifetime of the Cereel tools are not the only benefit. Rather, the surface, being an extremely smooth, non-porous material, provides a second benefit of particular interest to pill-production.

“The material is so hard and so smooth that the powder doesn’t get stuck in there,” Blaszczykiewicz said. “When the powder gets stuck in there, they actually have to shut down the equipment and clean it, where now they don’t have to do it anymore. Or, at least, a lot less.”

Formerly of Buffalo’s Accumed, producer of breathable fabric Breath-O-Prene, Blaszczykiewiczbought the machine shop which soon became Innex in 2010. As the development of their own proprietary ceramics got underway, and the technology grew increasingly fine-tuned, the potential for the future grew rapidly.

Vice President of Business Development and Engineering Mike Wagner said that with this new technology, the possibilities are virtually endless, yet they face the challenge of what people think ceramic is.

“Ceramic was one of the first materials over 2,000 years ago, and today in industry, it’s still the least understood,” Wagner said. “People have a perception of ceramics as cups, glasses, dishes, when really these high-end, nano-tube-type ceramics are a whole different world of materials. Once you introduce that and get the customer to understand the benefits of those materials in their industries, literally your growth is controlled by your ability to deliver.”

Wagner points to industries from defense to food production as possible applications of Cereel and Cerminator technology.

“When you talk about industries, it’s any industry you can imagine,” Wagner said. “Anything from making spaghetti, to making batteries, to making nuclear cells, to personal defense or military, pharmaceuticals and medical.”

The potential of ceramic in the defense industry is not new. In the 1960s, the British Army introduced Chobham armor, a type of composite ceramic used for armoring the M1 Abrams, Challenger 1 and Challenger 2 tanks, beginning in 1983. During the Persian Gulf War, 221 Challenger 1s were deployed to Saudi Arabia. Proving to be an extremely reliable armor system, Chobham armor has become standard among armored vehicles in Britain.

The focus of the future of Innex is right now hinged on the battery and pharmaceutical partners, with no formal plans to introduce the technology into the defense market. However, as the company grows and the potential of the material becomes known, Wagner said that is likely to change. For example, compared to components that traditionally are replaced every few hours, Wagner estimated Innex’s ceramic components to last up to four weeks without replacement.

“It is really going to dominate once it’s fully out into the market,” Wagner said. “For us, it’s controlling how it’s going to go out, how it’s successful and not having to worry about the perception of ceramic being a cup.”

Wagner now leads that initiative of changing perception, serving as essentially an ambassador to potential industry partners and explaining the potential of this technology. Joining him in that endeavor is supply chain and account manager Joelle Brunetto.

“For me, it’s just exciting because it has an enormous amount of opportunity,” Brunetto said. “Especially with the new materials we’re developing.”

The expected roll out date for the Cereel components is sometime in early 2018. With that pending roll out, the people behind the ceramics that could change the industrial world speak with excitement and anxiousness for the future.

“We’re not going after companies that do $50,000, we’re going after half a million or a million,” Blaszczykiewicz said. “And with myself and Joelle working with Mike to bring them in, there’s a lot of value there.”